In 1968, the U.S. government passed the National Trails System Act, which called for the creation of publicly accessible trails in urban and rural settings across the country in order to promote appreciation and enjoyment of the great American outdoors. These trails were to be divided into three groups: national scenic trails, national historic trails, and national recreation trails. The national scenic trails, in particular, are intended to showcase and conserve the country’s natural beauty and resources, and each spans at least 100 miles, crossing important cultural and historical landmarks and connecting communities across the nation. Here are some interesting facts about these 11 iconic trails and where to find them. 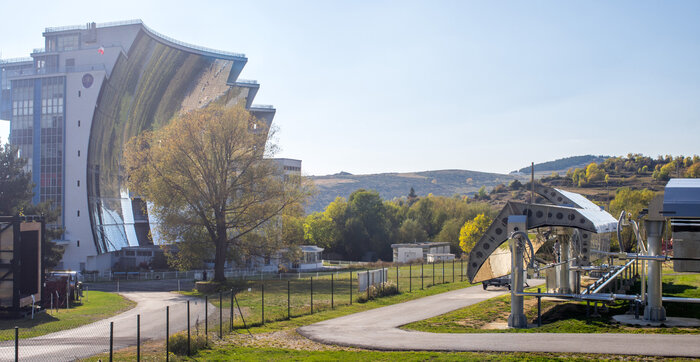 Test your knowledge!
Where is this gigantic solar furnace?

What Are the National Scenic Trails?

Perhaps the most well-known of the national scenic trails is the Appalachian Trail, the longest hiking-only footpath in the world. Designated as one of the first two national scenic trails in 1968, it runs more than 2,180 miles through 14 states between Georgia and Maine, with an overall approximate gain/loss in elevation of 464,500 feet. The trail opened to the public in 1937, and runs through the Appalachian Mountains in six national parks, eight national forests, the Blue Ridge mountains, the Berkshires, the Green and White Mountains, and the Mahoosuc Range. It is visited by short-term hikers, section-hikers, and thru-hikers who hike the entire trail in one season.

The Arizona Trail runs 800 miles long through mountains, canyons, and wilderness from the U.S.-Mexico border to Arizona’s border with Utah. It became an official national scenic trail in 2009 and is divided into 43 passages. Hikers looking to complete the entirety of the trail in small trips can follow the Arizona Trail Day Hiker’s Guide’s recommendation of 89 day hikes ranging from 3.8 miles to 13.8 miles each.

The Florida Trail is 1,300 miles long and is one of three national scenic trails contained entirely in one state. It runs from Big Cypress National Preserve in southern Florida to Gulf Islands National Seashore on the western end of Florida’s panhandle. Visitors can hike, swim, bike, horseback ride, picnic, and paddle on different sections of the trail. The Florida Trail’s four regions consist of a wide range of terrain including estuaries, sandhills, forests, and swamps. The trail’s founder, Jim Kern, first had the idea for the Florida Trail while hiking the Appalachian Trail in the early 1960s.

The Ice Age Trail is a 1,200-mile footpath located along glacial remnants from the last Ice Age. It runs through Wisconsin’s lakes, rivers, prairies, and forests, and features landscapes sculpted by continental glaciation. Hikers and snowshoers can study billion-year-old basalt bluffs and quartzite as well as 100-foot-deep kettle depressions caused by melted ice along the Ice Age Trail.

The Natchez Trace spans 450 miles from Natchez, Mississippi, through Alabama, and all the way to Nashville, Tennessee. It was walked by some of North America’s earliest inhabitants and comprises the Rocky Springs Trail, the Tupelo Trail, and the Ridgeland Trail in Mississippi, in addition to the Leipers Fork Trail in Tennessee. Part of the southernmost section of the trail — the Potkopinu section —runs along a sunken road that is likely the remnant of an old trail that once spanned from the Choctaw Nation to Natchez.

The New England Trail runs from Long Island Sound in Connecticut to the Massachusetts-New Hampshire border. It courses through wetlands, lakes, streams, waterfalls, mountain ridges, summits, and river valleys. Hikers can attempt the New England Trail (NET) Hike Challenge, which means hiking 50 or 100 unique or repetitive miles during one calendar year to receive a prize.

Spanning an incredible 4,600 miles across northern states, the North Country Trail is the longest national scenic trail in the United States. Incorporating segments of pre-existing trails, the trail slices through eight separate states and past three of the Great Lakes as it winds from Middlebury, Vermont, to Lake Sakakawea State Park in North Dakota. Along the way, it winds through beloved national parks like the Chippewa National Forest and Adirondack Park. Best of all, the North Country Trail is still growing and added an additional 71 miles this past year thanks to its collaboration with the state of Vermont.

Like the Continental Divide Trail, the Pacific Crest Trail spans the vertical length of the United States, running 2,650 miles from the Mexican border in California to the Canadian border in Washington. Nearly all of the trail is through untouched nature, including several national parks, mountain ranges, and deserts. It includes some of the highest regions in the Cascade and Sierra Nevada mountain ranges, spanning elevations from just above sea level in southern California to more than 13,000 feet at Forester Pass, between Sequoia National Park and Kings Canyon National Park. Hikers can choose to conquer the trail either northbound or southbound.  Furthermore, the entirety of the trail is open to equestrians who want to make the journey on horseback. In her bestselling memoir Wild, author Cheryl Strayed wrote about the journey of self-exploration she experienced while hiking the entire Pacific Crest Trail.

Beginning at the Continental Divide in Montana, the Pacific Northwest Trail skirts the U.S.-Canadian border as it traverses 1,200 miles before ending at the Pacific Ocean near Cape Alava, Washington. Along the way, it crosses through some of the most breathtaking terrain in the United States, including multiple national parks, national forests, and mountain ranges in Montana, Idaho, and Washington. Once hikers arrive at the coast on the Olympic Peninsula, they enter into some of the most remote wilderness in the United States, located deep in the heart of Olympic National Park.