Basque Country is an area in northwestern Spain and southwestern France, bounded by the Ebro River to the south and the Adour River (also known as the Aturri River) to the north. Haven’t heard of this region? You might be familiar with the Spanish city of Bilbao, the largest city in Basque Country and home of the magnificent waterfront Guggenheim Museum.

The Basque people can trace their history back hundreds of thousands of years and  call their homeland Euskal Herria. The majority of Basque people live on the Spanish side of the border in the Basque provinces of Bizkaia, Gipuzkoa, Araba, and Nafarroa. Of the more than 3 million Basque residents, just over 300,000 people live on the French side in the Basque provinces of Lapurdi, Nafarroa Beherea, and Zuberoa. But there’s also a scattered diaspora population of almost 10 million, which some refer to as the “eighth province.”

Today, you’ll find significant Basque populations in American cities such as Boise; Reno, Nevada; and San Francisco. Basque people in the United States celebrate their heritage on September 8, which is known as Basque Diaspora Day, but visitors can experience the local culture year-round. Here’s everything you need to know about visiting five key Basque communities in the U.S. 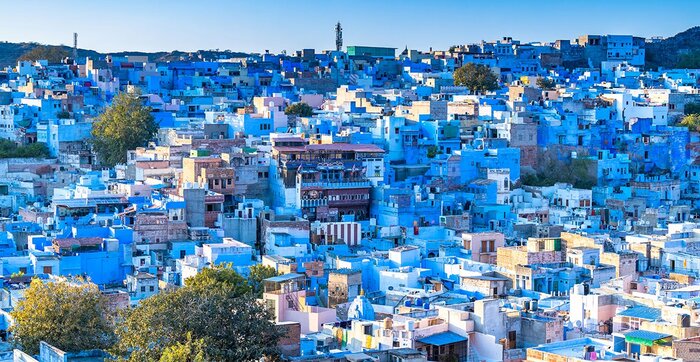 Test your knowledge!
Where is this blue city in the Thar Desert?

Basque Country has a strong cultural identity, which is represented in a wealth of literature, theater, festivals, music, and dance. Many Basque people speak Euskara, a unique language that is one of the oldest in Europe. Unlike French or Spanish, Euskara doesn’t include references to gender, and its alphabet doesn’t include the letters c, q, v, w, or y. In Spain, Euskara is an official second language in the Basque Autonomous Region and part of Navarre.

Like many Europeans, early Basque immigrants first arrived in the U.S. during the 19th century in search of a new life with more opportunities for work. Many Basque people headed to California during the Gold Rush. Over the next few decades, others came to farm, taking advantage of the newly built railroads to travel west. Often, Basque immigrants arrived through Ellis Island and continued on to Idaho, Nevada, Oregon, and Wyoming to herd sheep like they did back home.

Initially, many Basque immigrants chose to live in boarding houses. The rent was cheap, but more importantly, they could speak Euskara and cook the foods they enjoyed back home — activities that were banned in Spain from 1939 to 1975, when General Francisco Franco led a dictatorial regime suppressing Basque culture. Over time, Basque people in America assimilated into the wider community but retained many of their customs and traditions.

In the United States, Idaho has the largest Basque community outside of California, and a significant number of the population lives in Boise. If you’re keen to learn more about local Basque culture in Boise, the Basque Block is a good place to start. This Boise neighborhood is unmistakably Basque. Red, green, and white ikurriña flags flap in the wind, while swirled Basque crosses known as lauburus are embedded in stone on the sidewalks. The Basque Museum and Cultural Center inside the Cyrus Jacobs-Uberuaga House on Grove Street also provides fascinating insight into Basque heritage. Nearby, you’ll find one of the Laiak sculptures, which mark the boundaries of the Basque Block.

A 48-foot-long colorful mural depicting elements of Basque history and culture adorns the back of the former Anduiza Hotel and Fronton that used to house a popular esku pilota (handball) court. At the other end of the block is the Basque Center, which stages the San Inazio Festival each July and hosts the annual Sheepherders’ Ball in December. Another festival, Jaialdi, takes place in Boise every five years. Year-round, you can try pintxos (tapas) at the Basque Market and dine at Basque restaurants such as Bar Gernika and Leku Ona.

Buffalo, Wyoming, has a thriving Basque community, whose members call themselves “Buffalotarrak.” One of the first Basque pioneers to arrive in the area was a man named Jean Esponda, who came to work at the Healey and Patterson Sheep Company in 1902. Many others followed, making a living herding sheep in Bighorn National Forest. Later, they found accommodations at the Basque-friendly Hotel Idlewild, which opened in 1950 and now forms part of Buffalo’s Historic District.

Some Basque residents still work in agriculture, though the community is much smaller now than it was in the mid-20th century. Nevertheless, the Big Horn Basque Club puts on a big bash each year with Basque music, dancing, food, and wine, as well as sheepdog agility shows and a sheep-hooking competition. Other Basque-themed events are held throughout the year, including cooking classes and Basque dance lessons.

Basque immigrants came to Nevada in the late 1850s when news of silver in the Comstock Lode reached California’s gold miners. Many set up farming operations in the state, with the land around the city of Elko offering a more reliable opportunity to make money. By the turn of the century, political upheaval in Europe drove more Basque people to make the journey overseas. Some newcomers to the business took lambs instead of wages, integrating them into larger flocks while they learned the ropes from more experienced Basque sheepherders. Today, many Basque traditions are preserved in small Nevada towns such as Elko, which annually hosts the National Basque Festival in early July.

For local Basque delicacies year-round, head to Ogi Deli, which serves lamb sandwiches with sheep’s milk cheese, spinach, and paprika aioli. A couple of blocks away, dine at what used to be one of the area’s historic boarding houses. The Star Hotel first opened in Elko in 1910, offering rooms to sheepherders over the winter. Today, it also operates as a restaurant; guests can feast on soup, lamb, and flan (egg custard), washed down with a glass of Picon Punch, a traditional Basque cocktail.

Continue along I-80 to Gardnerville, where you can check out the Basque hats on the wall of the historic boarding house-turned-restaurant JT Basque’s, which has been operating since 1896. And if you’re in Reno, book a table at Louis’ Basque Corner to enjoy some authentic Basque cooking.

Bakersfield has long been home to a large Basque community. Many are the descendants of those who came to California following the discovery of gold in the foothills of the Sierra Nevadas. After the Gold Rush, they stayed, turning to ranching and sheepherding. Bakersfield’s Basque community was concentrated around the old train depot, but the neighborhood is no longer discernible geographically, although its cultural traditions are still preserved.

The Kern County Basque Club, for instance, hosts an annual festival featuring a Mus tournament (Mus is a popular Basque card game) and, of course, pilota, a form of racquetball. Foodies should also take note: Bakersfield claims to have the largest collection of Basque restaurants in the U.S. Among those that have been a fixture for decades are the Pyrenees French Bakery, Wool Growers, Benji’s French Basque Restaurant, and the recently relaunched Noriega’s.

For years, San Francisco’s Basque community occupied a space between Chinatown and the Italian neighborhood of North Beach. Basquetown, as it was known, was the place to go if you were a Basque in need of lodging or a meal from the old country. Some patrons made their home in the city; others were passing through en route to Idaho, Nevada, and elsewhere in California.

Today, the city’s cultural center is a reminder of the importance of the Basque people, who live on the West Coast. It keeps its clientele happy with regular showings of Basque-language films, year-round pilota tournaments, and traditional Basque food. If you want to celebrate Basque-style, head to 15 Romolo, a stylish bar that serves artisan cocktails and Basque-inspired pintxos in the building that was once home to the Basque Hotel. Ask nicely and they might mix you a Basque Firing Squad cocktail, made with patxaran, the region’s delicious sloeberry liqueur.