Mazes first appeared over 4,000 years ago in ancient Greece and ancient Rome, often in art, landscaping, and urban planning. England experienced a maze craze in the 17th century, when hedge mazes began to pop up in many royal gardens — the most famous of which is still intact today at Hampton Court Palace in London. But it wasn’t until 1993 that the trend made its way to the U.S., and the first corn maze, called the “Amazing Maize Maze,” was created in Annville, Pennsylvania, by Don Frantz and Adrian Fisher. Corn maze creation took off from there, and North America now claims some of the largest and most intricate maize mazes in the world. Usher in the fall season and check out these five elaborate corn mazes. 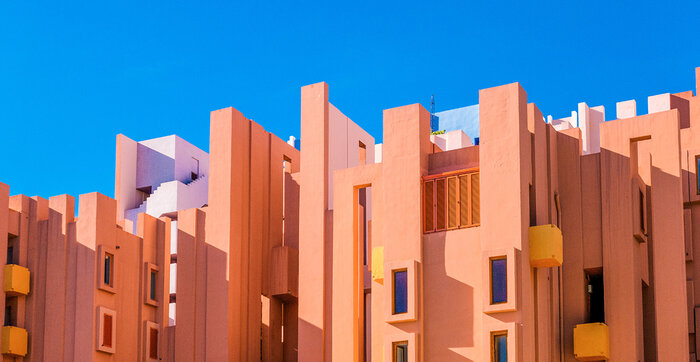 Test your knowledge!
Where is this modern, pink building?

The small town of Spring Grove, Illinois, boasts the “world’s most intricate corn maze,” with four miniature mazes to conquer alone or be tackled as one giant puzzle. The Richardson Corn Maze — a family farm since 1836 — sits on 28 acres of corn fields and includes 10 miles of trails that are sure to lead you astray at least once or twice. The corn fields are planted in May and the mazes are created after months of collaboration with a full-time team of graphic artists and MazePlay owner Shawn Stolworthy. Maze themes change each year and have incorporated everything from The Beatles to Star Trek.

The largest maze in New England is the Great Vermont Corn Maze in Danville, Vermont. Spanning 24 acres, the Big Maze requires a roughly three-hour commitment to navigate the miles of hilly terrain. (Be sure to wear comfortable walking shoes and bring a water bottle.) An underground tunnel, dinosaurs, numerous bridges with bird’s-eye views, remnants of mazes-past, and new surprises wait within the 10-foot-tall cornfield walls. If you’re not feeling up for the Big Maze, you can still hit all the highlights with a 40-minute, mapped-out stroll through the Scenic Maze.

To call this place a “farm” is a huge understatement. Kraay Family Farm has been operating for 30 years and has over 40 attractions and amenities. The Kraays decided to open their farm to the public 15 years ago, and have enjoyed watching visitors learn more about farm life ever since. One of the most popular attractions is the 15-acre Lacombe Corn Maze, boasting over three miles of labyrinth pathways. The 2021 maze design honors the 100th anniversary of the discovery of insulin with a giant insulin bottle inside an iconic Canadian maple leaf.

Challenge yourself by playing Flashlight Maze and try to find your way out with just the light from a torch, glow stick, or the full moon! Other autumn-themed activities at the farm include mini golf, zip lines, pig races, and a pumpkin cannon that allows shooters to knock pumpkins off the top of a school bus with a kid-friendly cannon.

The Guinness Book of World Records awarded the record for the largest corn maze on Earth to Cool Patch Pumpkins in Dixon, California. The pumpkin patch had a humble start; the idea formed after local Matt Cooley and his children found success selling pumpkins on the side of his pumpkin field. Cool Patch Pumpkins was founded soon after in 2001 by Matt and his brother Mark Cooley. A few years later, the ambitious brothers set their sights on creating the world’s largest corn maze. They achieved this with a 40-acre corn maze in 2007.

The brothers went on to beat their own record in 2014 with a monstrous 63-acre maze. Today, the pumpkin patch and its impressive corn maze are among California’s biggest and best fall attractions. This maze is family-friendly, but no one under 18 is allowed in without adult supervision due to the maze’s size, complexity, and potential to confuse visitors. The Solano County Sheriff’s Office says they receive calls every year from people unable to find their way out!

The two Cornbelly’s locations at Thanksgiving Point and Spanish Forks in Utah offer 55-plus attractions that include four different corn mazes. Cornbelly’s has been crafting mazes since 1996, using just a weed whacker and their imaginations in the early days. Now, 26 years and countless mazes later, computers and high-tech equipment help the staff plan and execute intricate and inventive mazes every year. The main corn maze at Thanksgiving Point sits on eight acres and takes about 30 minutes or more to complete. Maze explorers are also required to answer trivia questions with the help of an “interactive passport” to find their way out.

The smaller, self-guided maze at Spanish Forks is a five-acre maze and takes about 20 minutes to complete. Visitors can also hop aboard the “Grain Train” and take a ride through the network of trails to spot scarecrows and jack-o-lanterns along the way. The spirit of Halloween takes over at night, when Thanksgiving Point and Spanish Forks turn into Insanity Point. Adults and children aged 12 and up can check out the haunted barn, hay maze, and, of course, the haunted corn maze.

A Guide to Road-Tripping in Southern Utah

8 American Vacations That Were Popular in the 1980s

Hottest, Loudest, Smallest: The Most Extreme Places Around the World

A Guide to Road-Tripping in Southern Utah

8 American Vacations That Were Popular in the 1980s

Hottest, Loudest, Smallest: The Most Extreme Places Around the World