You might think that your local grocery store has a great selection of fruits imported from around the world, but the world is a strange place. There are thousands of fruits that are even more exotic than their names suggest. Here are seven foreign fruits that you’ve probably never heard of. 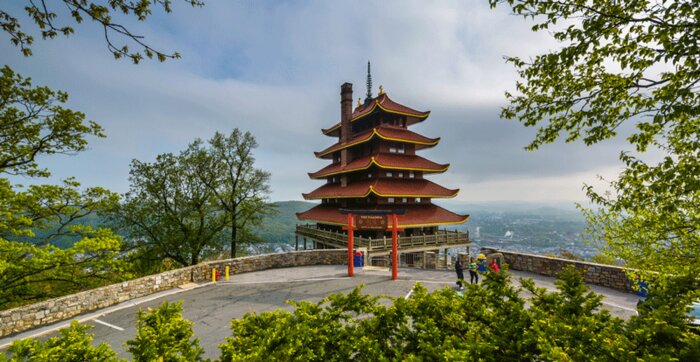 Test your knowledge!
Where is this mountaintop pagoda?

If you ever stumbled upon a rambutan while walking through a forest, your first instinct would probably be to steer clear of it. The fruit looks similar to a sea urchin with a red body and long green hairs — not something to mess with. As it turns out, however, the rambutan is actually quite delicious.

Rambutans are native to the tropical regions of southeast Asia and grow on trees that can reach up to 80 feet. When the fruit is peeled from its spiky outer layer, it has a white center that tastes sweet and creamy. Eating a rambutan has dozens of health benefits such as weight loss, better digestion, and increased resistance to infections.

The durian is native to Asia and has developed a rather notorious reputation for its pungent odor. Scientists quoted in "Smithsonian Magazine" even claim “Its odor is best described as turpentine and onions, garnished with a gym sock." The durian can be smelled from yards away and is actually so bad that it's banned on public transportation.

While that might not be the most marketable description for a fruit, there are plenty of durian fans around the world. It’s one of those things that you either love or hate. Durian is typically used to flavor candies and drinks, but can also be eaten raw. Would you try this stinky fruit?

“Star Trek” fans might recognize the African cucumber or kiwano as a “Golana melon” from the planet Golana. While you might have thought it was a prop invented by science fiction writers, it’s actually a real fruit that grows in southern Africa. If the fruit is eaten before reaching maturity, it tastes similar to a cucumber and is frequently pickled. If you wait for it to ripen, it essentially becomes a self-contained fruit cup with hints of melon, kiwi, banana, and citrus.

Ackees are native to Jamaica and when cooked, taste similar to scrambled eggs. They’re beloved on the small island, but have yet to reach international acclaim since they’re actually poisonous. Ackees contain hypoglycin A, which is a poison that can cause vomiting, drowsiness, hypoglycemia, muscular exhaustion, and possibly coma or death. Sounds delicious, right? Every part of an immature ackee is poisonous, but if you wait for it to ripen, the center of the fruit becomes safe to eat. Just stay away from the rind and seeds. The fruit is typically cooked, which can help remove any traces of the poison.

No, it’s not an art installation at a high-end gallery. It’s a citrus fruit. Buddha’s hand citron is primarily grown in China and is well-known for its wonderful, lavender-like aroma. Use it as an ornament in your home, air freshener in your kitchen, or a garnish in your drink. Since it has no seeds and a sweet flesh, it’s a very popular ingredient in marmalades and jams.

“Monstera deliciosa” translates into “delicious monster" in Spanish and there’s hardly a more apt description for this foreign fruit. A mature monstera deliciosa is the same size and shape as a large ear of corn and takes about a year to ripen on the tree. Once the fruit reaches maturity, it features tropical notes of pineapple, coconut, and banana. If you take a bite before it reaches maturity, however, you’re in for a rather unpleasant surprise.

Unripe monstera deliciosa fruits are poisonous. The fruit contains ocalic acid, which is a chemical used to bleach wood and remove rust from metal. If you don’t wait for your monstera deliciosa to ripen, you could experience severe throat and skin irritation.

Jackfruit is a large, spiky fruit that’s native to the tropical regions of southern India. What makes this fruit unique is its massive size. It’s officially the largest tree fruit in the world. Some jackfruits can weigh up to 80 pounds! When cut open, jackfruits have a tough texture like shredded meat, but a sweet flavor similar to apples, pineapples, mangoes, and bananas.

6 Reasons Why Guatemala Is an Underrated Travel Destination

6 Reasons Why Guatemala Is an Underrated Travel Destination